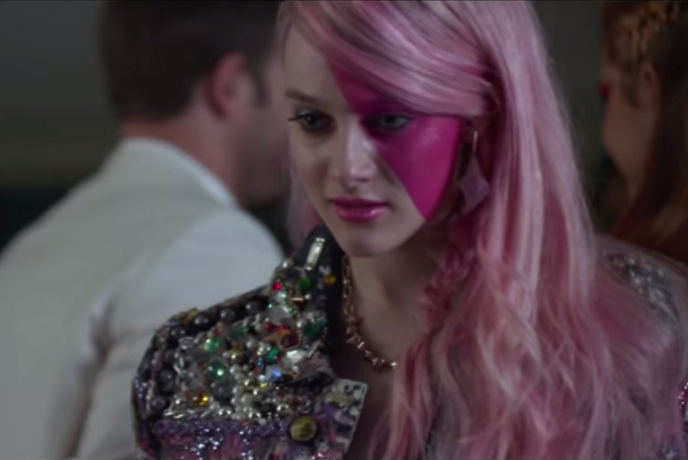 From the studio that brought us the smash hit, Pitch Perfect comes … ummm the next Pitch Perfect! Yes ladies we’re going to go ahead and predict that the upcoming film, Jem and the Holograms is going to blow up the big screen this year. Watch the trailer below and find out more details about this new chick flick release.

Starring Aubrey Peeples as shy musician, Jerrica (or Jem), Jem and the Holograms brings the famous 80s rock cartoon to life in this live-action romp. The story is a little bit different from the cartoon which told the story of Starlight Music owner/manager Jerrica Benton transforming into rock god Jem with help from a holographic computer named Synergy. The upcoming film adaptation has taken some pretty serious liberties with the plot and instead focuses the story of a YouTube sensation’s rise to fame.

The trailer does seem to give away the entire plot of the movie and fans of the original cartoon series are up in arms about the plot changes but it still looks like it’s set to be a big chick flick hit at the box office. The trailer introduces us to Jerrica, her sister and friends (the holograms) as they get signed to Starlight Enterprises, after Jerrica’s younger sister, Kimber (Stefanie Scott) uploads one of her bedroom-recorded videos to the web and sees it go viral. The ladies are transformed into glammy pop stars only to realise that fame and fortune isn’t all it’s cracked up to be.

How to Prepare to Breastfeed

Jem and the Holograms is scheduled to hit cinemas in October this year. Watch the trailer below.

WIN! We're busting period myths AND giving away a

WIN: Awesome Movie Hamper to Celebrate the Release of the Action-Packed ‘The 355’

WIN Tickets to a Screening of Will Smith’s ‘King Richard’ in CT & JHB!