When I grow up, I want to own a Ford Ranger Wildtrak. Growing up in South Africa with a dad in the construction industry, I’ve always had a soft spot for bakkies. They’re supremely handy to own, whether you’re going on an off-the-beaten-track adventure for a weekend away or need to transport an armchair you’re having reupholstered to fit in with your newly redecorated living room. Offering a luxury driving experience in bakkie’s clothing, the Wildtrak is no doubt a lust-worthy acquisition for any South African gal who wants to enjoy the finer things in life, even when she’s on a dusty adventure.

But, of course, as we grow older we all learn the cold hard truth that it’s our budgets that dictate our purchases, not our hopes and dreams. Dreaming of owning a flagship version of any car is one thing, but when it comes down to the reality of Rands and cents, you tend to keep a considerably more adult approach to your purchases. This is where the new Ford Ranger XL Sport comes in. 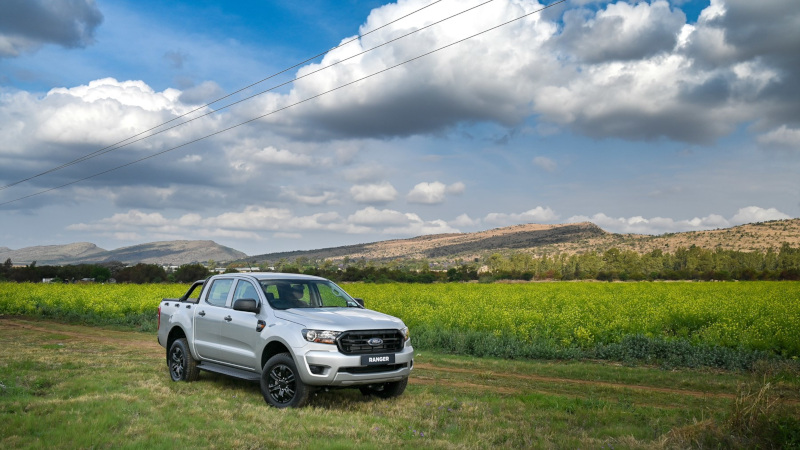 The new mid-range offering in the Ford Ranger lineup gives more-frugal customers a taste of the luxury offerings they’d get with the flagship Wildtrak at a more pocket-friendly price. With the addition of stylish accoutrements, the Ford Ranger XL Sport offers 85% of the flagship experience you’d get from a Ranger Wildtrak or high-spec derivative at a fraction of the price. The result is a work-horse that boasts plenty of street cred, and I can’t help but love it.

What I love most about this new derivate in the Ranger line-up is the price. I got behind the wheel of Ford Ranger 2.2 TDCi XL Sport 4×4 double-cab and at a price of R559,500, it makes the idea of owning a Ford Ranger a lot more realistic. The Ford Ranger XL Sport pack sees an additional cost of R16,500 being added onto the base price of the entry-level Ranger XL Series and for that little bit extra, you get a whole lot of value.

What is the Ranger XL Sport?

While the Ranger XL is best known for being Ford’s budget workhorse bakkie, the new sport pack offers drivers a chance to add a few luxury features. Available for the single cab, SuperCab, as well as double-cab variants, the Sport pack transforms the affordable Ranger’s “all work and no play” appearance into something with a little more street cred. Creating a striking look, the XL Sport pack does away with the chrome spars and grille, jazzing things up with a gloss-black grille as well as a matching sports bar, and rear bumper. The Sport pack also sees the standard 16-inch wheels bumped up to 17-inch alloy wheels. 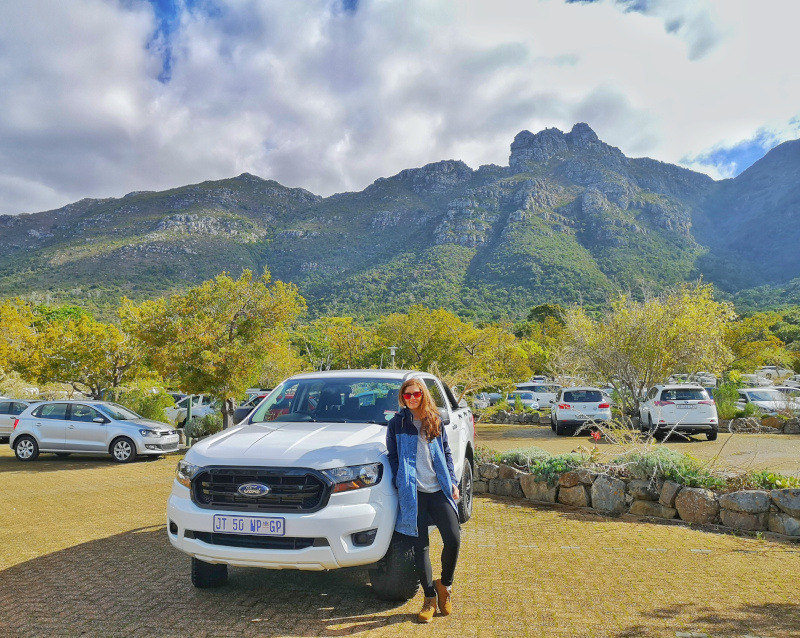 The version I drove also boasted an 8-inch touchscreen infotainment system with SYNC 3 setup at R6,060 (with a pair of USB ports and Apple CarPlay/Android Auto compatibility) tied into the multifunction steering wheel and dealer-fitted black side steps at R5,050. If you’re not keen on the additional upgrades, the XL Sport comes standard with a basic SYNC 1 infotainment system with a 4-inch display. If the infotainment system is important to you, then I would highly recommend upgrading to the 8-inch touchscreen version as it really elevates your in-cabin experience, and you get the bonus of gaining navigation functionality with Apple Maps or Google Maps, depending on which device you use. Whichever option you choose, the infotainment system allows for audio streaming and hands-free calling via Bluetooth connectivity using a tethered smartphone.

Inside the Ranger XL Sport

While the upgraded XL Sport sees significant changes being made to the exterior of the standard Ranger, the interior changes are minimal. In the double cab version, you’ll still experience the same generous interior space, but there are a few interior sacrifices to be made when comparing it to the flagship or higher-spec versions of the Ranger. 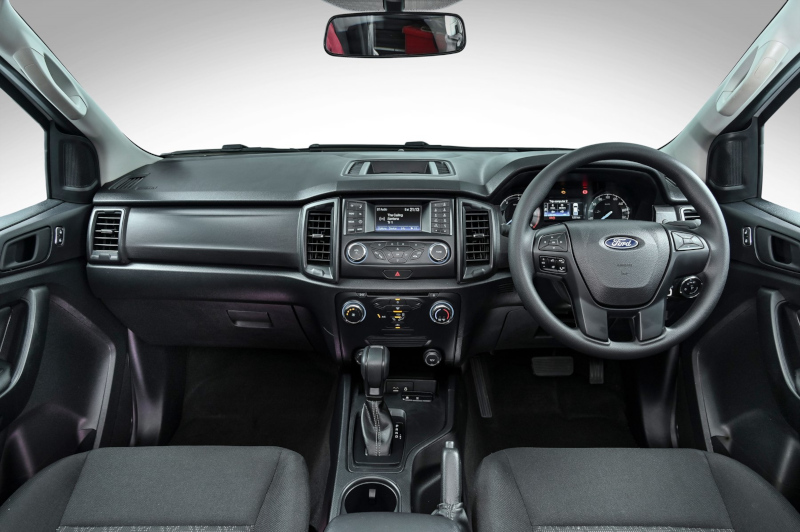 There are a few luxury interior features I missed with this version of the Ranger (like leather seats, automatic climate control, and the handy built-in sunglasses holder), but after reminding myself of the price tag of the XL Sport, you quickly forget about those small additions. Even without a few minor luxury details, the XL Sport’s cabin retains most of the Ranger convenience features and still offers a very comfortable in-cabin experience. The only addition I really longed for when driving the XL Sport was rear and front parking sensors. It took a little getting used to manoeuvring the mammoth bakkie around Cape Town’s roads and fitting into tight parking spots without the helpful guidance of sensors.

In terms of engine and transmission, as an alternative to Ford’s newer-generation engines, the budget-friendly XL Sport is fitted with the tried-and-tested 2.2-litre 4-cylinder turbodiesel engine, which produces peak outputs of 118 kW and 385 Nm of torque. While the newer engines offer over 400 Nm the XL Sport is more than capable on the road or when towing. It also comes fitted with a tow bar as standard, and Ford says it’s capable of pulling a 750-kg unbraked trailer or up to a 3.5-tonne braked trailer. 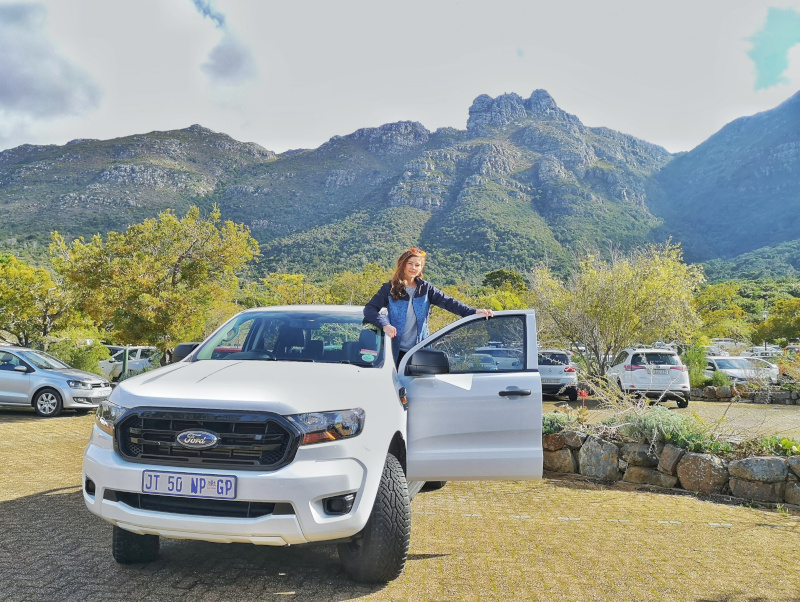 Dual front airbags, ABS with EBD, stability control, traction control, hill launch assist, roll-over mitigation, adaptive load control, and trailer-way control are all standard with the Ranger XL Sport, but if you’re looking for semi-autonomous features and higher levels of passive and active safety features, then you’ll have to shell out considerably more for the Ranger Wildtrak. In terms of 4×4 capability, the Ranger XL Sport boasts 223 mm of ground clearance, while hill descent control, rear differential lock, and a low-range transfer case are fitted.

Black Friday: How to Get the Best Deals from Amazon, eBay to Your Door in SA

On the performance front, the Ranger XL Sport is indeed impressive. The 6-speed automatic gearbox in the test vehicle I drove offered slick enough gear changes and was fairly quick off the mark. While I did experience brief moments of lag when overtaking or needing to speed up, the XL Sport is more than capable on the open road and offers plenty of oomph under the hood. Sure, you won’t be the quickest off the mark when the lights change, but most people don’t invest in a bakkie to be a speed queen, so for me, it wasn’t really a big deal. If, however, absolute power is important to you, then you’re better off splashing out on a Wildtrak. 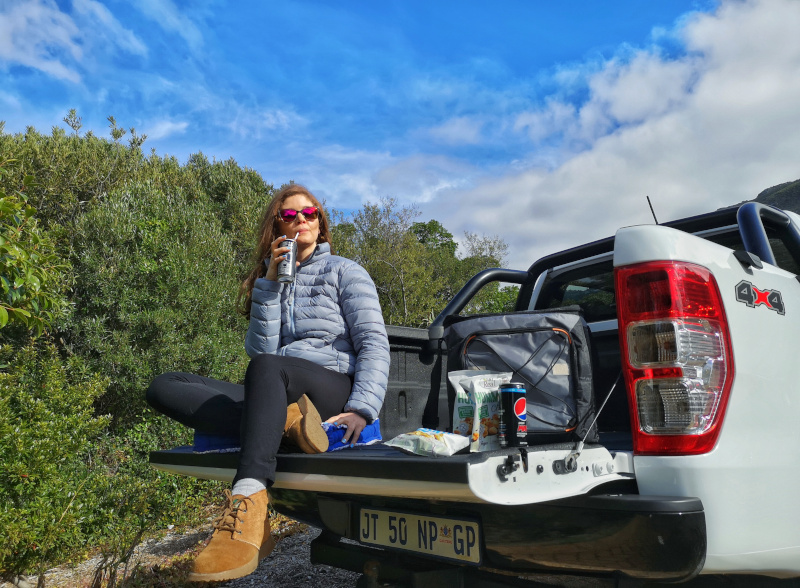 It may not be as sprightly as the Wildtrack, but where the Ranger XL Sport does match its flagship counterpart is fuel economy. Ford’s claimed fuel consumption matches that of the larger, 3.2-litre 5-cylinder engine in the Wildtrak, coming in at 8.2l/100km. Not bad for a workhorse!

The Ford Ranger 2.2TDCi double cab 4×4 XL Sport auto will set you back R559,500, making it considerably cheaper than the Ranger FX4 and the Wildtrak. The XL Sport is sold with a 4-year / 120,000km comprehensive warranty, 3-year/unlimited distance roadside assistance and 5-year/unlimited km corrosion warranty. A 6-year/90 000km service plan is also included for additional peace of mind. 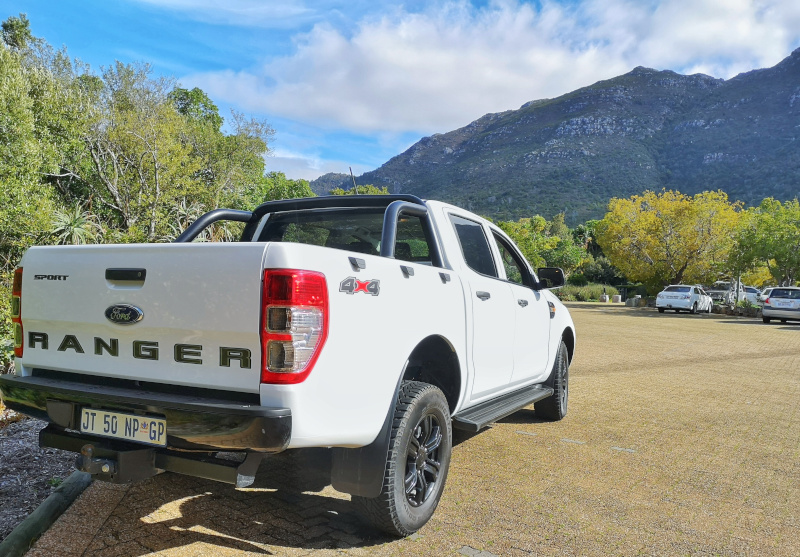 Should you buy the Ford Ranger XL Sport?

Ford has more Ranger variants than some people have underwear, and at first glance, the XL Sport may appear to be just a marketing ploy in an over-inflated Ranger lineup. But after driving this derivative for a week. it’s clear that there is indeed space for this spruced-up workhorse on the market. The more I drove the XL Sport, the more I fell in love with it. It’s the ideal bakkie for everyday life and is affordable enough to make it financially viable for South Africans who aspire to live the Ranger life but can’t justify shelling out on the luxury Wildtrak or FX4 versions.

The new additions to the styling make the XL Sport feel a little more special than the rest of the foot soldier bakkies on the road. The cabin had a much more luxurious feel to it and I could actually see myself buying this bakkie. For me, it’s the difference between the Ford Ranger being an aspirational luxury bakkie and an attainable family car many middle-class families can afford. Sensible, capable, and stylish, The Ford Ranger XL Sport is the bakkie we’ve all been asking for.

Looking to treat yourself to plant-based takeaways

Spring is here and Crocs is celebrating the new se

Bread can most certainly form part of a healthy, n

SA has some great fitness and sporting gear, but a

We're crushing on this super cute ducky charm and

Review: Ford Ranger FX4 — A Bakkie for Any Occasion?