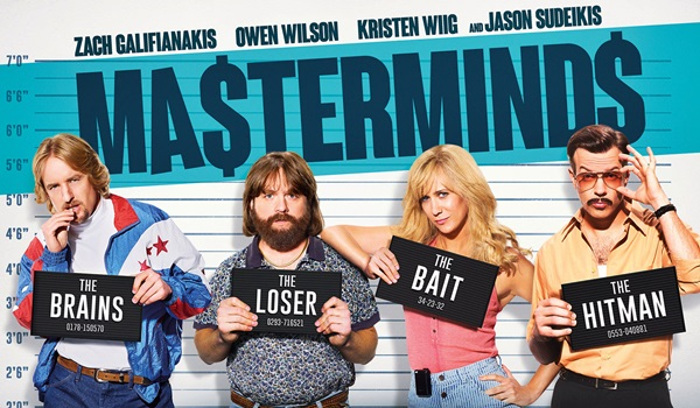 Have Lunch with a Spectacular View at SugarBosch Bistro Stellenbosch! [Review]

We all know that feeling of being stuck in a boring, dead-end job, doing the same old chores day-in-and-day-out. Which is why this new comedy starring Zach Galifianakis, Kristen Wiig, and Owen Wilson is so brilliant. Masterminds follows the life of David Ghantt (Galifianakis) who is stuck in the monotony of driving an armoured truck day in and day out, so when his work crush lures him into the heist of a lifetime, David’s all in. Despite a pack of harebrained bandits and an absurdly flawed plan, David manages to steal $17 million, and promptly hands it over to the gang – who just as promptly double-cross him. Forced to go on the run, David must dodge the authorities and a hit man, and try to turn the tables on his untrustworthy comrades.

Masterminds is sure to be a laugh-a-minute and to celebrate the release, we’re hosting two exclusive screenings with Ster-Kinekor cinemas in Johannesburg (Rosebank) and Cape Town Tygervalley) on Thursday, 13 October 2016 (next week) at 20:00. Attendees will be given the chance to be one of the first in South Africa to see the film ahead of its release and enjoy a complimentary beverage and popcorn too. Winning! Masterminds releases in South African cinemas on Friday 14 October 2016.

WomenStuff readers stand the chance to win one of 25 sets of double tickets for the screenings in Cape Town or Joburg!

To enter simply email crystal@menstuff.co.za with your name, age, contact details, and which screening you’d like to attend (JHB or CT). Don’t forget to include the subject line; “Masterminds screening entry” in your email. Winners will be notified via email on Tuesday 11 October 2016 at 17:00.  T&Cs apply.

Win 1 of 10 Cadbury #TasteTheAction Hampers Valued at R200 Each!