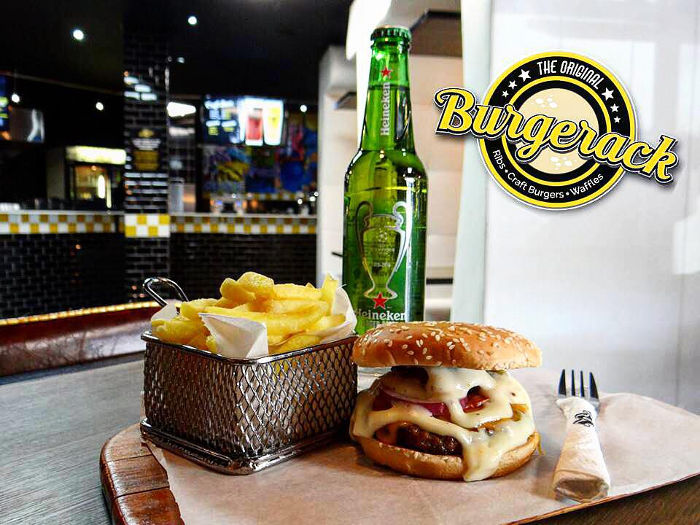 Trend Alert: Florals are on Fleek this Spring!

If there’s one thing I L.O.V.E, love, it’s American cuisine. If they do a good burger, fries and a shake, then I’m there! So, when I heard about the new US-themed eateries, Burgerack, springing up all over Jozi I knew I just HAD to give it a try. There’s no doubt I was excited. Then I heard they were also serving savoury AND sweet waffles and I got even more excited. On their website, Burgerack claims they are a “burger joint with an obsession with taste” and that they are bringing “some fresh new flavour to the craft burger market.” They also promise double thick, triple delicious milkshakes; lip-smackingly good ribs, and wild waffles. To be honest, when you visit Burgerack the first thing that pops into your head is Rocomamas. The menus look super similar and you’d swear they used the same interior decorator. But, which Joburg burger joint is better – Rocomamas or Burgerack? I popped into the new Burgerack at Coachman’s Crossing in Lyme Park to find out!

There’s no doubt Burgerack looks super cool – their decor takes all the things you love about American-style diners and brings it into the 21st century. Red leather, diner-style furniture mixed with lashings of bright yellow and black wall art come together to bring customers a hip and relaxed atmosphere that begs you to sit down, hang out, and stay a while. I must say I was super impressed with the look and feel of the place and they get top marks in my books when it comes to decor. If you’re the type of person who loves to take a lot of selfies with cool backgrounds, then this place is for you. 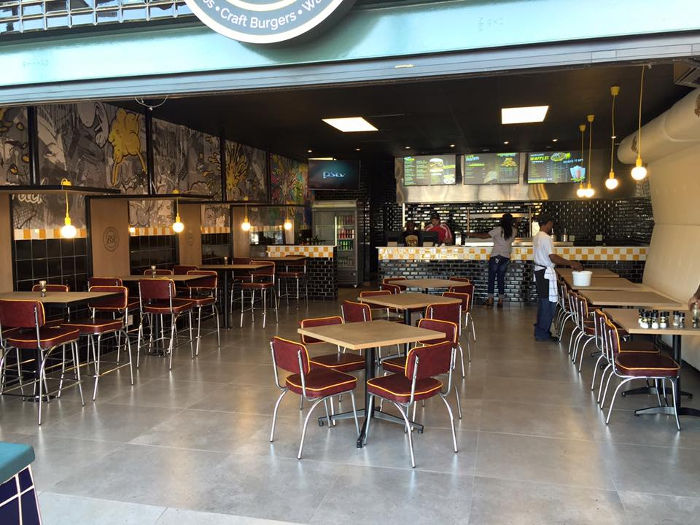 As for the menu, it’s basically Rocomamas with a few extras added in. Hungry visitors can choose from a selection of ‘recommended’ house burgers or build their own burger using a variety of ingredients. If burgers aren’t your thing then you can opt for a serving of ribs (with either BBQ or Peri-Peri basting – 500g pork ribs at R109) a plate of Nachos Mexicana (served with tomato salsa, guacamole, cheddar, and mozzarella – R45), a serving of Chicken Drummets (basically basted chicken wings – 6 for R45), or a savoury waffle in three different flavours (including Bacon, cheddar cheese, and mushroom sauce – R55 each). On the side, you can choose from either a regular fries (R20), regular Onion Rings (R20), or a variety of salads (including American-style potato salad – R35). To order, you simply write your name at the bottom of the menu and tick the little white box next to the goodies you want to order.

I opted to start my meal off with a portion of Drummets with BBQ sauce and then decided to try the Mexican Burger (beef patty, red onions, dill pickles, guacamole, jalapenos, and tomato relish – R49) with a side of regular fries for mains. The boyfriend opted for a kid’s ribs and chips (R59 for 200g) because it was lunch time and 500g of pork ribs just seemed like too much. We washed it all down with a double-thick Vanilla milkshake (R20) and a Fiery Dragon Ginger Beer (R39 for R440ml).

The boyfriend and I shared the chicken wings and they were definitely tasty. The basting sauce wasn’t as delicious as the Rocomamas one but it was still super yummy. My only gripe with the chicken wings is that they charge you an extra R6 for a dipping sauce (which tasted watered down) whereas Rocomamas wings come with a free choice 6-different basting sauces and 2 different dipping sauces. The Rocomamas wings are also cheaper at R6.50 per wing compared to R7.50 per wing at Burgerack.

As for my burger; it was good. Quite tasty in fact. But, not quite Rocomamas . The burger buns they use at Burgerack seem cheap and mass produced. Mine fell apart as I tried to shove my burger into my mouth and it just tasted like a regular old supermarket-bought white bread roll. And, while the flavours on my burger were nice, it tasted like there was something missing. It’s not quite the same ‘lick-your’fingers-fantastic’ taste that I get from Rocomamas. The fries that came along with it were not my cup of tea. In fact, they were over-cooked and tasted like we got the dregs from the bottom of the fryer. I definitely won’t be adding an extra R20 on to my meal for fries next time I visit.

My favourite burger at Rocomamas, and the closest to Bugerack’s Mexican Burger, is the Bacon Cheese Guac (with bacon, aged cheddar, tomato, guacamole, red onion and smoked mayo – R58) While the Burgerack option is cheaper at R49, I’d definitely pay an extra R9 for bacon and cheddar on my burger. But, to be fair to Burgerack, if you had to make the same Mexican Burger at Rocomamas it would cost you R67. There’s no doubt about it, the Burgerack burgers definitely come in cheaper than Rocomamas, so it’s great for those who want to save a few bucks, but it does feel like you’re eating at a cheaper, less fantastic Rocomamas. For me quality and taste is king so when given the choice I’d choose Rocomamas burgers over these every time.

As for the ribs. These were a winner! The boyfriend (who is a bit of a rib connoisseur) gave them top marks. We often order ribs at Rocomamas and the Burgerack ribs were neck-in-neck with Rocomamas. They’re definitely a must-try when you visit! The basting sauce is delicious and the serving sizes are quite generous. The 200g portion the boyfriend got was great and was just enough to satisfy his lunch-time cravings. If you want to compare prices a half rack of pork ribs at Rocomamas will set you back R150 while the Bugerack option is R109. That’s quite a price difference so when it comes to ribs, Burgerack wins the battle for sure. Sure, Rocomamas ribs come with a choice of 4 different basting sauces and 2 different dipping sauces but the free sauces don’t quite make up for the whopping R40 price difference.

As for the drinks, I was quite impressed with the Burgerack milkshakes. The Vanilla milkshake we ordered was thick, creamy, and oh-so-delicious! I would definitely recommend it when you visit. While many say that the Rocomamas shakes are all kinds of legendary, the Burgerack vanilla milkshake comes in R8 cheaper than the Rocomamas version and is just as tasty. A friend joining us for lunch tried the Burgerack Crushed Orea milkshake (R35) and said he preferred the Rocomamas version which comes in at the same price. The rest of the shakes on the menu come in at relatively similar prices to Rocomamas and there are some interesting flavours including Nutella, Whispers, and Horlicks & Honey. Burgerack also offers a wide range of craft beers (including Aces Lager, Devil’s Peak, and Soweto Gold) at R45 for a 500ml draught.

Sadly, I didn’t get the chance to try the waffles when I visited Burgerack but I’m hoping to pop in again soon just to try these out on their own. I can’t say I will rushing back for the burgers anytime soon, but who knows, Burgerack could be my new waffle and shake spot of choice! But, overall, as a girl who loves burgers and fries, I have to say Rocomamas wins this battle for me.

You can find Burgerack at various locations in Johannesburg – visit their website for more information on the menu and locations.

Top Spots to Discover in the Constantia Wine Valley this Summer